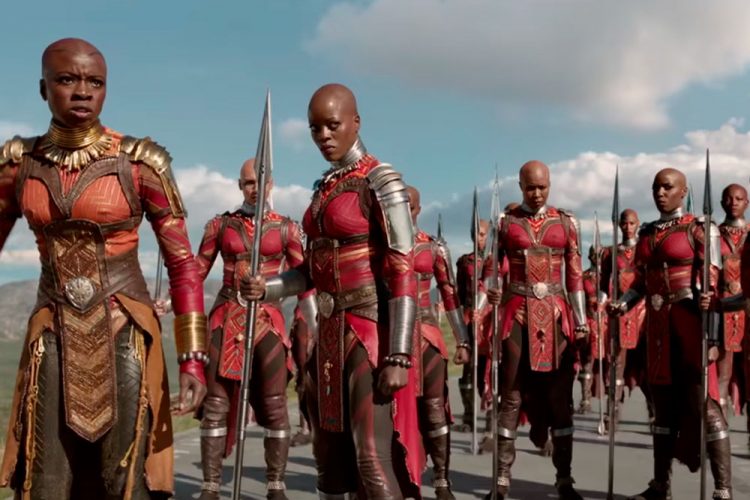 IF YOU WEREN’T living under a rock the last two to three months you would have witnessed, in some form or the other, the phenomenon that was the Black Panther movie. It is a film featuring the first black mainstream comic book super hero and it took the Marvel Cinematic Universe all of 10 years to realize this film which quickly became a cultural phenomenon.

There are many takeaways from the film: dialogues on diaspora, ideas of belonging, tradition vs radical change and technological advancement, violence as a midwife of revolution among many others. The conversations post-screening were endless. However, the thing that leapt out to me the most was the role of women in this never colonized, super-advanced African society.

In addition to centering beautiful dark skinned women, the film foregrounded their various roles and gifts; leadership, wisdom, efficiency, and resourcefulness. The fact that the leader himself, the Black Panther, was surrounded by these women and depended on them in a pinch signaled their importance to the life and survival of the nation.

So important were the women to this fiercely independent nation that the challenge to the throne by the charismatic villain, with a compelling narrative of his own, was doomed to fail. This is mainly because his journey involved mowing down these women and stepping over their bodies. His vision of a black new world order and black dominance came at the expense of black women from his ancestral home.

His radicalism was tainted by misogynoir.

The meta-narrative in this film for those paying attention was clear. There can be no narrative of black liberation that sacrifices black women. There can be no progress where black women are expendable – their wisdom negated, their issues neglected. This has been the heart of the conflict of many a black power movement, where the leadership sought to relegate women’s concerns to the margins. In many instances, these movements sought to replicate oppressive ideas of male dominance and female subservience and perpetuated abuses, emotional, physical and sexual, against the spirits and bodies of black women. Michelle Wallace, Angela Davis, Kathleen Cleaver and Elaine Browne have all testified to this.

This is the main lesson from Wakanda – that black women are integral to the strength of any nation. In the Caribbean we trudge along, if at all, on the road to genuine equality and gender justice. We tend to see women voicing their concerns as annoyances and inconveniences, but what progress have we really made since our march from independence. Many of our leaders speak of black radicalism in post-colonial societies, but if Wakanda is the ideal black liberation space, then we have a long ways yet to march.

We were, many of us, caught up in the euphoria of Wakanda; with seeing an African nation in such glory. Perhaps the lessons might stick after a fourth and fifth viewing of The Black Panther. What is clear is that without the women Wakanda, would be lost.